U.S. stock index futures dived on Thursday, with the tech-heavy Nasdaq 100 index set to confirm bear market and the Dow on course to affirm a correction as selloff picks up pace after Russia launched an all-out invasion of Ukraine.

Global shares slumped and oil prices broke above $100 a barrel, while safe havens gold, government bonds and the dollar surged in the flight to safety. [MKTS/GLOB]

Ukraine fought Russian forces along practically its entire border with Russia, confirming the worst fears of the West in the biggest attack by one state against another in Europe since World War Two.

In response, the United States and its allies promised tough sanctions against Moscow after weeks of fruitless diplomatic efforts.

If losses for Nasdaq 100 futures stick through regular trading hours, the index could confirm a 20% decline from its November record closing high for the first time since 2020, when the coronavirus outbreak crushed global financial markets.

Dow futures indicated that the blue-chip index was set to confirm a correction from its all-time closing high on Jan. 4. A correction is confirmed when an index closes 10% or more below its record closing level.

«I do not think many investors have dealt with the combination of surging inflation, which was last really seen in the early 80s, combined with full-scale military operation in Europe, which again, the last time that happened was second world war,» said Neil Wilson, chief market analyst for Markets.com.

«It’s a confidence knocker. This is sort of uncharted territory for a lot of people.»

The CBOE Volatility index, also known as Wall Street’s fear gauge, was last trading at 36.81, its highest since Jan. 24.

However, oil stocks outperformed with Exxon Mobil Corp (NYSE:XOM) and Chevron Corp (NYSE:CVX) climbing 2% and 3.5%, respectively, as the attack exacerbated worries that a war in Europe could disrupt global energy supplies. [O/R]

Fears of a war in eastern Europe have hammered stocks in recent days, putting the main indexes on track for their worst week in a month, down between 2.8% and 3.8% as of Wednesday’s close.

Investors will also be on the lookout for weekly jobless claims data at 08:30 a.m. ET, which are seen declining to 235,000 over the last week. 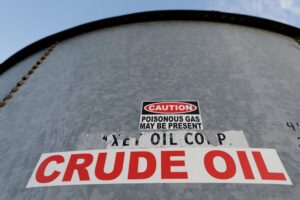